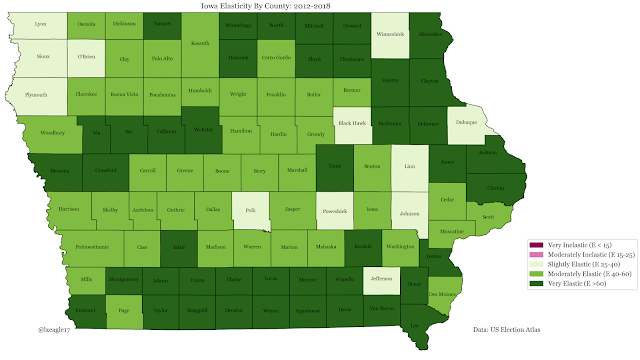 Barack Obama won Iowa twice by fairly large margins, but it appeared to have taken a hard turn to the right in 2016. Stunningly, Joe Biden may have a chance to flip it back in 2020, just four years after Hillary Clinton lost it by 9.4 points. Iowa is a high turnout state, so it’s not realistic to anticipate him winning it on the basis of turnout. But he may swing enough voters to carry it anyways.

Biden’s keys to the state will lie in clawing back votes in areas with many Obama-Trump voters; counties such as Dubuque (E 39.6), Clinton (E 63.4), and Woodbury (E 49.2) will be ones that he will look to take back or, at the very least, come close in. Equally importantly, however, he’ll need to run up the margins in urban and suburban areas; Polk (E 36.7), Story (E 45.7), Boone (E 53.0), and Scott (E 41.0) are ones that he will likely target. Polk and Scott are key areas of growth, and Scott’s elasticity means Biden should win by far more than the 1 point Hillary Clinton managed in 2016.
Other key counties Biden will look to flip are Wapello (E 73.2), Winnishiek (E 39.1), Lee (E 69.2), and Fayette (E 71.2). Biden’s strength with seniors could really swing the state his way, as they are a larger-than-average chunk of several of the most elastic counties in the state. Although Donald Trump won this demographic by four percentage points in 2016, recent polls indicate that this is the area Biden has clawed back the most ground in; a September poll with AARP Iowa showed Biden with a 17 point lead (55-38) over Trump with voters over the age of 65.
This last point is key, as it indicates that Democrats have a far higher ceiling when it comes to growth in the state. Trump's strength with rural white voters and seniors saw him carry several counties by unfathomable margins in 2016, but Biden’s comparative and well-documented advantage them, combined with his growth among suburban voters and his improvement with rural white voters, could result in the 2020 map more closely resembling the 2012 one. The demographics in this state indicate high potential for a rebound against Trump, which is excellent news for Democratic chances of flipping the state.
Before making predictions about what exactly 2020 may look like, however, it's worth taking a step back to analyze how the state has voted in the past. For this, we'll use the Partisan Voting Index metric, which tells us the partisan lean of an area relative to the nation. Zach Adams (@PviGuy) has created maps illustrating the stark change in Iowa's voting -- although the state was 2 points more Democratic than the nation overall in 2012, it was 11 points more Republican in 2016, buoyed by the Democratic vote evaporating in the east. Biden's key to victory will likely lie in clawing back these eastern counties, several of which are extremely elastic and more traditionally Democratic.

Again, remember that statewide margins are what really matter -- in order to win, Biden doesn't need to win all of Obama's 2012 counties. He just needs to do better than Clinton did in 2016 while expanding on her urban-suburban margins. A Biden victory map in 2020 could thus closely resemble Rob Sand’s victory for Iowa State Auditor in 2018, or the Congressional vote by county in 2018 (where Democrats picked up 2 more congressional seats in the state). A reasonable map in the case of a Biden victory in 2020 would probably resemble the map below (made with Zach Adams).

Now, it’s true that parts of Iowa that voted for Obama have shifted permanently to the GOP, and there’s no reason to think Biden can win it back with the same margin as he and Obama did in 2012. But he’ll do much better there than Clinton did in 2016, and with the environment looking incredibly Democratic in 2020, that might be enough.

A special thanks to Zach Adams (@PviGuy) for his incredible work here in mapping the area's PVI and for all of his help with analyzing the state.

Suburban Reversion, And A Twisted Form Of American Exceptionalism -- by Evan Scrimshaw